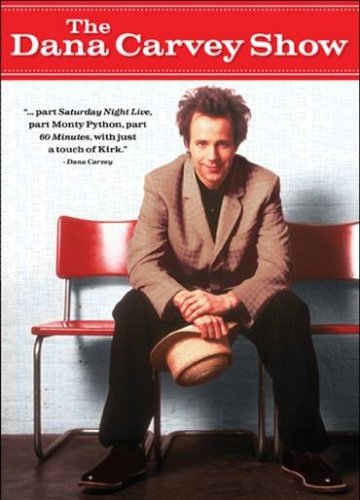 Brand : Shout Factory
from USA
to Seychelles
in 5-8 days
At your doorstep by Jun 18  to Jun 21 with standard delivery

Saturday Night Live veteran Dana Carvey takes a decidedly hilarious spin on politics and pop culture in this amazing, but short-lived sketch comedy series. The Dana Carvey Show debuted on ABC in 1996 and included the comedic talents of Steve Carell(The Office) and Stephen Colbert (The Colbert Report) before either were household names. Also includes Bill Chott, Elon Gold, Heather Morgan, Peggy Shay, and Robert Smigel. The Dana Carvey Show might have hit the airwaves a moment too soon. Only eight episodes were made and only seven of those were broadcast before it was cancelled, even though it enjoyed a loyal following. Available for the first time on DVD, all 8 episodes including one that was never aired! Bonus Features: * One unaired episode. * Deleted scenes. .com ---- One of Saturday Night Live’s best impressionists, Dana Carvey launched a sketch comedy show in the wake of a 1995 HBO special. Like Ben Stiller’s short-lived show, however, his timing was off--and his humor too pointed for primetime. If Carvey’s reign on ABC was brief, he recognized talent when he saw it, and contributors include Steve Carell, Stephen Colbert, Robert Smigel, Louis C.K., Charlie Kaufman, Bob Odenkirk, and 30 Rock's Robert Carlock. Using counter-culture humor as their guide, Carvey and cast--notably, Bill Chott, Elon Gold, and Heather Morgan--combined topical skits, short films, and animated segments, like "The Ambiguously Gay Duo" (which Smigel took with him to SNL). Each episode starts with a sponsored title sequence, such as "The Pepsi Stuff Dana Carvey Show," followed by a song and dance routine and questions from the audience. If the primary-year digs at Bob Dole and Bill Clinton seem dated, that doesn't make them any less funny--especially Carvey's cackling Strom Thurmond impersonation--though the abstract bits tend to hold up best to repeat viewing. Skit highlights include Carvey as a Johnny Cochrane-styled attorney, Carvey as a Regis Philbin who'll do anything for a spot on The Late Show (like socking Carol Channing in the kisser), Colbert providing a "gentle news" editorial while hugging a puppy, and Carvey and Carell as "Germans who say nice things" by yelling at the top of their lungs. Though Mike Myers never dropped by, Carvey elicited guest appearances from Philbin, Tony Randall, Isaac Hayes, and SNL alums Jan Hooks (as Kathie Lee Gifford) and Phil Hartman (as Larry King). This two-disc set adds over-the-top deleted scenes, an interview with Carvey and Smigel, and the unaired eighth episode, in which Abe Vigoda utters the last word: "Schmuck!" --Kathleen C. Fennessy
Show More
Reviews

Disclaimer: The price shown above includes all applicable taxes and fees. The information provided above is for reference purposes only. Products may go out of stock and delivery estimates may change at any time. Desertcart does not validate any claims made in the product descriptions above. For additional information, please contact the manufacturer or desertcart customer service. While desertcart makes reasonable efforts to only show products available in your country, some items may be cancelled if they are prohibited for import in Seychelles. For more details, please visit our Support Page.